Founding Spirit of the University: National Salvation, Independence and Self-Reliance 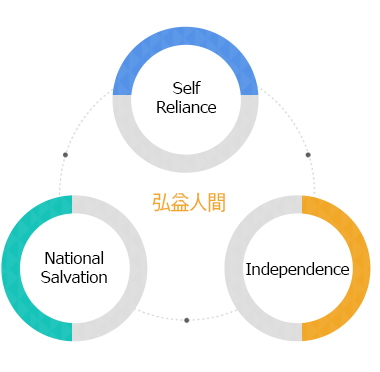 The foundational spirit of our university lies with our founders' love for their nation and its people. In accordance with the will of Mr. Beomjeong who devoted himself to national independence, and that of Mr. Ki-hong Park who financially supported such efforts, Mrs. Hyedang put such patriotism and cultural affection at the heart of our university's founding. Many of the patriots who led the independence movement believed that it was paramount to protect and preserve our national and cultural legitimacy. At the center of that legitimacy lay the humanitarian principles of Dangun, the founder of the first Korean kingdom. Mr. Beomjeong also put in great effort to keep the ideals of Korea’s native religion, Daejonggyo, alive, more from his conviction towards preserving our cultural heritage than for religious reasons.

Although independence was eventually achieved, Mr. Beomjeong – having experienced firsthand the tragedy of a nation split in half – realized the necessity of educating the values of a Korean identity to younger generations, and named his newly established university "Dankook" to signify its roots in the Dangun legacy. He emphasized national salvation, independence, and self-reliance as methods of realizing these ideals. He believed it was imperative that men and women should be able to act with patriotic conviction and independence.

Thus Dankook's core principles can be said to be National Salvation, Independence, and Self-Reliance, all founded upon Dangun's humanitarian ideals. These three ideals each respectively pertain to national, cultural, and global perspectives.

"Truth and Service" was established as our motto to embody the spirit of our founding philosophy – National Salvation, Independence, and Self-Reliance – in our education. It signifies that our institution aims to educate individuals who cherish truth and serve their community, nation, and mankind in general. "Truth" is a spiritual indicator, while "Service" is a behavioral one.

Our goal of "educating patriotic experts who contribute to mankind" was established in order to embody our foundational ideals of National Salvation, Independence, and Self-Reliance. We aim to (1) cultivate the spirit of human respect, (2) encourage and apply creativity, and (3) nurture practical capabilities.